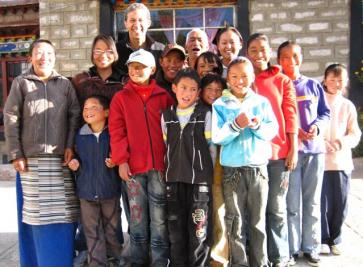 This past October a group of us were traveling  in Tibet. During that time we had an opportunity to visit with the children at the Chushul orphanage. A number of people expressed a desire to contribute to the proposed building project there. I have hesitated to contact anyone about it until I felt that we had a workable plan. I am happy to report that at last we are ready to move.  Over the past few months we have been working on numerous aspects of the project. We have been in communication with Peggy Day, who was responsible for the original fund raising and construction of the orphanage. Peggy is a remarkable and committed woman who for the past 28 years has developed and overseen philanthropic projects throughout the Himalayan region, both as Executive Director of the American Himalayan Society in the 1980’s and more recently as a Himalayan guide and private citizen. She has agreed to take on responsibility for the project. She will be traveling to Tibet in February specifically to start and oversee the Chushul building project. Between her contacts in Tibet and the ones that we have cultivated we are anticipating that the project can be completed by summer.

For those who are unfamiliar with the orphanage here is a little history about how it came into being. In 1998 Peggy raised $30,000 to help the very poor village of Chushul build an orphanage. The local government provided the land, the community in the Chushul Valley provided the labor and the nearby monastery loaned their truck.  With the help of the Tibet Fund, the money was wired in April and the locals went to work. By August, the initial building was completed - a beautiful two-story home with hand-painted beams and bunk beds to the ceiling.   It included a classroom with a library full of books. It is now home for 26 children, including those who are in higher studies outside. The hope is to reach the capacity of 30 children in-house by the end of 2009.

In the last ten years, with the financial help of sponsors and on-site support of others, the orphanage has evolved to its present state. A greenhouse, a new kitchen/family room, a playground and a fence to enclose the property have all been added.   Now, we have this important project for 2009. We will be building a proper bathroom with several showers, toilets and sinks …an important step forward towards providing and teaching hygiene.

The plan is to build an attached building for showers, toilets, sinks and lockers.  Toilets and sinks will be in the front and you will walk further into the building to showers and lockers. The showers will be 3’ square with a 6” wide divider between showers, with a 3’ walkway in front and lockers across the opposite wall.  Right now the plan is for four showers, four toilets and four sinks.  If there is enough money, we will improve the existing shower room by the gate and add toilets so that it could serve as the boy’s bathroom and the new building attached at the back of the main house can be for the girls.  There will have to be a septic tank dug as far away from the river as possible. This could be the biggest expense, but we shall see. We will begin construction this spring.

As with the original building, we will work with the Tibet Fund of New York and the Tibet Development Fund (TDF). Funds will be wired by the Tibet Fund to the TDF for payments in stages with monitoring and supervision by TDF. Although Peggy will not be able to remain on site until the project’s completion, we do have reliable people in Lhasa who will be able to confirm as the various project stages are reached.

All of Peggy’s services, as well as the services of the Tibet Fund and Tibet Development Fund are donated. The full amount of all your donations will go to building bathrooms for the children.

I am excited about finally getting under way. This is something that will make a lasting difference in the day to day lives of the children. It is a wonderful opportunity for us to put our lofty aspirations and hopes into a very concrete form. It doesn’t get any more down to earth than bricks and mortar and bathrooms.

Now that we are ready to move,  I invite you to make a donation. It’s easy to do. Online go to our website at www.theoservice.org.  Go to the “Donate” page and choose “Tibetan Orphanage”. Or simply mail your check to: Theosophical Order of Service, PO Box 660, Warrrenville, IL 60555. Be sure to write “Tibetan Orphanage” in the memo. I thank you in advance for your generosity.