Into the golden vessel of great song
Let us pour all our passion; breast to breast
Let other lovers lie, in love and rest;
Not we, — articulate so, but with the tongue
Of all the world.
Edna St. Vincent Millay

Edna St. Vincent Millay was a Dionysian of passion who symbolized the “New Woman” at the end of the First World War. However, she wrote largely in the most controlled of poetic forms, the sonnet. 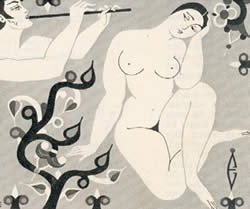 As Van Wyck Brooks wote in his study of New England writers New England Indian Summer “In Edna Millay’s high lyrical talent, the Yankee note, which one felt from the first, increased in depth and clarity as time went on, as the flippancy of her earlier verse – its conscious naiveté mingled with wonder – yielded to profundity of feeling…She was direct and lucid because her feeling was intense, her sense of the miracle of consciousness and the things of earth.”

She was born in Maine, of a long line of Maine families, and the sea coast provides her with many of her early images — of anchors, shells, ships and sea-farers, but there was also a certain distance from her milieu:
“Safe upon the solid rock the ugly houses stand:
Come and see my shining palace built upon the sand.”

She left New England for university studies at Vassar, a leading college for women outside New York City, and she lived much of her life in the art and literature milieu of New York City. Her writing talent showed itself early, and even before graduation in 1917, she was acting and writing for a newly-formed theatre group on Cape Cod — the Providence Players. Eugene O’Neill was the leading figure of the Players with a much darker vision of the human condition than Millay’s. O’Neill is still a leading figure of the American stage while Millay’s early plays The Lamp and the Bell or Two Slatterns and a King are hardly known except by specialists. One of her plays, however, The King’s Henchman of 1927 was transformed into an opera by the young New York composer and music critic Deems Taylor. The plot is similar to Wagner’s Tristan und Isolde —though less grand. The King’s Henchman was performed 14 times in three seasons by the Metropolitan Opera House — a record for an American work.

There were two themes to Edna St. Vincent Millay’s poetry: preoccupation with youth and the passing of time:

What Lips My Lips Have Kissed

What lips my lips have kissed, and where, and why,
I have forgotten, and what arms have lain
Under my head till morning; but the rain
Is full of ghosts tonight, that tap and sigh
Upon the glass and listen for reply;
And in my heart there stirs a quiet pain
For unremembered lads that not again
Will turn to me at midnight with a cry.

For Millay, time passes, but does not heal:

Time does not bring relief, you all have lied
Who told me time would ease me of my pain!

Time passes, and the society grows worse as seen in these lines from her darker Conversations at Midnight (1937):

The word ‘Personal’ now on an envelop means
‘impersonal’, ‘important’ ‘unimportant’
‘the Finest’ ‘the Best’ ‘the Purest’ — what do they mean now?
Something somebody wants to sell,
We are a nation of word-killers: hero, veteran, tragedy –
Watch the great words go down.

Her root convictions of faith in the individual, the sense of the potential in human nature, the love of live and the belief in its ultimate goodness were sorely tested by the law case in New England’s Massachusetts: the arrest for a bank robbery and the killing of the bank guard in 1920 of Nicola Sacco and Bartolomeo Vanzetti and their execution in 1927. For Millay, the case was her one entry onto a political stage — driven less by politics than by a sense of unfairness of the weight of social power against two immigrants who hardly understood the legal system in which they were caught. Her poem Justice Denied in Massachusetts published just as Sacco and Vanzetti died is an eloquent echo to Bartolomeo Vanzetti’s letter to Judge Thayer who had condemned them:

If it had not been for these things, I might have live out my life talking at street corners to scorning men. I might have die, unmarked, unknown, a failure. Now we are not a failure. This is our career and our triumph. Never in our full life could we hope to do such work for tolerance, for joostice, for man’s understanding of man as we do by accident. Our words — our lives — our pains — nothing! This taking of our lives — lives of a good shoemaker and a poor fish peddler — all! That last moment belongs to us — that agony is our triumph.

Edna St. Vincent Millay’s themes and style were not those of the Depression 1930s nor the war years of the 1940s. She died in 1950 never having seen old age. Basically, she was a poet of the 1920s, but since the preoccupations of youth and the passing of time are eternal themes, her poetry merits new readers.