(second in a series by Rene Wadlow )

G.W. Russell. “The highest minds building one upon another”

“All literature tends to produce a sacred book by an evolution of thought of the highest minds building one upon another” A.E.

George Russell (1867-1935) was an Irish poet, painter, mystic, and reformer of agriculture in the years 1900 to the mid-1930s. He wrote under the initials A.E. and was so well known as A.E. that his friends called him “A.E.” and not “George”. He was a close friend and co-worker with William Butler Yeats who was a better poet and whose poems are more read today. Both A.E. and Yeats were part of the Irish or Celtic revival which worked for a cultural renewal as part of the effort to get political independence from England.

Ireland lived under a subtle form of colonialism rather than the more obvious Empire in Africa or India where domination was made more obvious by the distance from the center of power and the racial differences. The Irish were white, Christian, and partially anglicized culturally. English and Scots had moved to Ireland and by the end of the 19th century became the landed gentry. Thus Russell and Yeats felt that there had to be a renewal of Irish culture upon which a state could be built.

For A.E. the truly modern are those engaged in meditation and spiritual disciplines, a way of reaching “the world of the spirit where all hearts and minds are one.” Unless the Celtic peoples create a new civilization, they will disappear and be replaced by a more vigorous race. An Irish identity must be open and unafraid of assimilating the best that other traditions have to offer. As A.E. wrote “To see, we must be exalted. When our lamp is lit, we find the house of our being has many chambers…and windows which open into eternity.”

When the Irish Free State was created in 1919, the island was partitioned, Northern Ireland remaining part of the United Kingdom. Tensions between the Free State government and the Republicans who rejected the partition led to a civil war. Even after the civil war’s end in 1923, Republican resistance and general lawlessness continued throughout the 1920s. During its first decade the Free State government faced a serious crisis of legitimacy. It had to assert the new state’s political and cultural integrity in the face of partition and the lack of social change. In its economic structures, legal system, post-colonial Ireland looked much like colonial Ireland. Therefore the government stressed an “Irish culture” of the most repressive and narrow form. The Roman Catholic Church had a unique and virtually unquestioned monopoly on education in Ireland. Popular Irish nationalism had been structured around the antithesis between Ireland and England, and this continued after independence when it was said that all “immorality” — obscene literature, wild dances and immodest fashions — came from England. After 1923, the Catholic hierarchy fulminated most consistently and strongly against sexual immorality, not merely as wrong, but, increasingly from the 1920s, as a threat to the Irish nation.

To counter this narrow, state organized vision of culture, A.E. put all his energies into a revival of rural Ireland through organizing the Farmers’ Co-operative Movement. He stresses that “the decay of civilization comes from the neglect of agriculture. There is a need to create, consciously, a rural civilization. You simply cannot aid the farmers in an economic way and neglect the cultural and educational part of country life.”

Both A.E. and Yeats came from Protestant backgrounds and were deeply influenced by Indian thought reading the Bhagavad Gita and the Upanishads where sexual passion is the link between body, soul, and spirit. In his only novel The Avatars, A.E. wrote “such was the play of Helen which made men realise that beauty was a divinity. Such was the play of Radha and Krishna which taught lovers how to evoke god and goddess in each other.” The Avatar in Hindu thought is a spiritual being which takes human form in order to reveal the spiritual character of a race to itself such as Rama, Krishna or Jesus. In Indian thought the Avatar was always a man and came alone. But in A.E.’s story the Avatars are a man and a woman who teach the unity of all life as seen by the love between the two. There is but one life, divided endlessly, differing in degree but not in kind. “The majesty which held constellations and galaxies, sun, stars and moons inflexibly in their paths, could yet throw itself into infinite, minute and delicate forms of loveliness with no less joy, and he knew that the tiny grass might whisper its love to an omnipotence that was tender towards it. What he had felt was but an infinitesimal part of that glory. There was no end to it.”

A.E. knew that he was going against the current of the moment. As he wrote “There never yet was a fire which did not cast dark shadows of itself.” At the end of the novel, the Avatars are put to death, but their teaching goes on

“It is this sense of the universe as spiritual being which has become common between us, that a vast tenderness enfloods us, is about us and within us.” 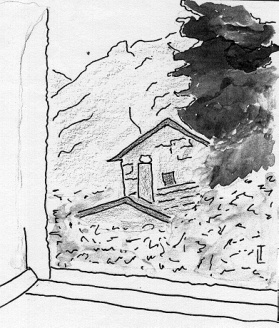