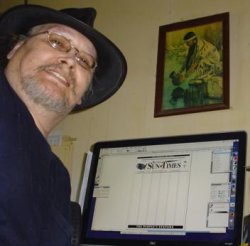 The TOS has been supplying survival assistance in the form of blankets and winter clothes, as well as Christmas presents for the children, to Rosebud Indian Reservation for several years. Our desire now is to escalate that assistance in ways that will be self-perpetuating and will encourage internal development to improve the quality of life on the Reservation. For the reader to have an appreciation of the magnitude of the problem, please review this link to an article in the Rapid City Journal of September 12, 2006.  Read the story.

In April of this year we began to support the publishing of the tribal newspaper Sicangu Sun Times. The newspaper was in dire need of more modern computers to replace old and failing equipment.  As of early June the publisher has received two Apple PowerMac computers – G4 and G5 - for the work of graphics design and page layout, and more equipment is on the way. We consider the newspaper to be a major player in spreading ideas and encouragement for building businesses and farming projects to improve the quality of life.

The photo below, taken by Bonnie Young, is of the publisher, PR Gregg-Bear, with a computer recently received.  All the expense of this equipment so far (nearly $1,700) has been contributed by just one couple in Arizona.  It appears that there is one more expensive piece of software needed to make it possible to transmit the newspaper electronically to the printer in another city.  Your help would be received with much gratitude.  If you would like to help defray the expense of this equipment, you can make a tax-deductible donation using our online donation page or by mail.  Checks should be sent to:
Theosophical Order of Service
P.O. Box 660
Warrenville, IL 60555
Write "Rosebud Project" in the memo line.

Since there is a very high unemployment rate, it is vitally important to help develop the economic base and generate ways for the Indians to help themselves.  If you have any ideas for help in this regard, we want to hear from you.  To learn more and to participate in this work, please contact Miles.

Here is an excerpt from the newspaper story referenced above:

"PIERRE - A study that found American Indians living in southwestern South Dakota have the nation's lowest life expectancy shows the need to continue efforts to improve health care on reservations, health officials said Monday. The national research study, led by Dr. Christopher Murray of the Harvard School of Public Health, reported that six counties that include Pine Ridge Indian Reservation and Rosebud Indian Reservation have the lowest life expectancy in the nation.  People in that area can expect to live 66.6 years, well short of the 79 years for low-income rural white people in the Northern Plains.

Jacqueline Left Hand Bull, administrative officer of the Aberdeen Area Tribal Chairmen's Health Board, said she is not surprised by the study's findings. American Indians in South Dakota have high rates of infant mortality, cancer, diabetes and heart disease, and many live far from hospitals and clinics, she said. "The American Indian population has long had the lowest life-expectancy rate in the country, and to find out the lowest of the low is right here in South Dakota is not a surprise," Left Hand Bull said.  The counties listed as having the lowest life expectancy also consistently rank among the nation's poorest counties, with low annual incomes."

Miles Standish comment: You think that's bad? From what I've read, the World Health Organization ranks the United States #37 in over-all health among nations in the world!