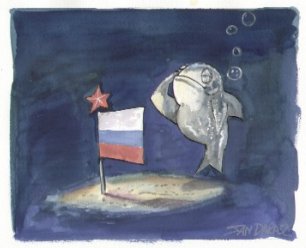 There is a touch of the 19th century scramble to divide Africa among European colonial powers in the decision of Russia to drop a capsule containing a Russian flag on the Arctic sea floor not far from the North Pole on August 2.  In preparation for the 1885 Berlin Conference which was to draw the boundaries of the African colonies, there was a mad rush to place national flags on all the commercial outposts so that France, England, Germany, Spain, Belgium and Portugal could claim prior possession of the area.

The Russian flag provoked an immediate three-day Arctic trip of the Canadian Prime Minister, Stephen Harper, followed by strong statements from Norway which has Arctic claims, and an expedition from Denmark, whose Greenland possessions allows it to claim that the disputed Lomonosov Ridge, a 1,240-mile underwater mountain range, is attached to Greenland.  The Danish Minister of Science and Technology, Helge Sander, said “No matter how many flags you plant or how many prime ministers you send, that doesn’t become a valid parameter in the process.”  However, to make sure that the Danish flag is seen, Denmark has plans for two more expeditions to justify its claims.  Not to be left behind, the US Coast Guard is sending a ship this year, the cutter Healy, to map the sea floor on the northern Chuhchi Cap, an underwater plateau that extends from Alaska some 1,500 miles northward.

The Russian expedition was led by Arthur Chilingarov, an Arctic explorer but who is also a vice-president of the Russian Parliament,  so that the dropping of the flag is a symbol that will be brought quickly to the attention of Russian lawmakers.  The expeditions reflect the growing rivalry between Russia, the USA, Canada, Norway and Denmark for the Arctic’s underwater riches, an estimated 10 billion dollars of riches, in particular, oil and gas.  Iceland has also presented claims but is a less active participant in the scramble.
The irony of the scramble is that the race is intensifying because global warming is shrinking the polar ice, making oil exploitation economically possible.  More oil use will intensify global warming. There are also possibilities of valuable minerals on the Arctic seabed as well as untapped fishing stocks.

Fortunately, there are UN structures which should prevent a free-for-all battle based only on political influence. The Third Law of the Sea Conference created a UN body — the Commission on the Limits of the Continental Shelf — whose mandate is to decide the claims concerning the continental shelf.  The Commission is made up of independent experts drawn from states which have ratified the 1982 Law of the Sea Convention.  Thus, there are no US members on the Commission as the USA has not ratified the Convention, due to narrow nationalistic fears in the US Senate.  There are efforts currently underway to revive Senate action on the Law of the Sea Convention, but even if the USA ratifies, there will not be a vacant seat on the Continental Shelf Commission for some time.  As with all UN bodies made up of independent experts, some members are more independent than others, and some are more expert than others.  The Continental Shelf Commission is to base its decisions on geological evidence, but politics is never far away.

The rather complicated Continental Shelf issues arise from the results of the Third UN Law of the Sea Conference which began in Caracas in 1974 and whose Convention came into force in 1982.  There had been two earlier UN Conferences on the Law of the Sea in 1958 and 1960 but with rather narrow legal agendas.  By the time of the Third Conference, many colonial countries had become independent and wanted a role in what was presented at the time as the most important legal gathering since the 1945 San Francisco Conference launched the UN.  Moreover, many “geographically disadvantaged” nations such as those who were landlocked or with short coasts were determined not to be left out.  Geography often won over Cold War ideology as Swiss and Nepalese diplomats led the landlocked caucus.

The momentum for the Third Law of the Sea Conference had begun with a historic speech in the UN General Assembly in 1967 by Ambassador Arvid Pardo of Malta who developed the idea of the common heritage of mankind for the sea-bed and the ocean floor beyond the limits of national jurisdiction.  Pardo also had a strong ecological concern stressing that “nations must do together what they cannot do singly.  Since none of them can conserve the ocean environment and prevent pollution individually, they must do it together.”

US international law scholars, in particular Louis Sohn, professor of international law at Harvard, had played an important role in setting the intellectual foundations for the conference.  The US Draft Ocean Treaty presented in 1970 was very international and generous in a common heritage of mankind direction.  Later, the Treasury Department and the Office of Management and Budget gutted the US Draft, leaving however the innovative sections on the settlement of disputes to which Sohn had largely contributed.

The Law of the Sea Conference which ran from 1974 to 1980 — “the longest running show on Broadway” as some called it — was held at a time when many diplomats felt that there would be a world-wide struggle for resources.  There was the 1973 Arab oil boycott and the resultant steep rise in petroleum prices.  Howard Hughes had just launched a new ocean mining vessel, the Hughes Glomar Explorer, which many saw as a sign that only the most technologically advanced — either private or State-owned companies — would have access to hard minerals on the sea floor, in particular manganese nodules which contain copper, nickel and cobalt as well as manganese.

The fear of a resource battle led governments to place as much of the seabed as possible under national control — leading to what some called “the law of the seize.”  Under the Convention, every State has the right to exploit the ocean floor and the seabed up to 200 nautical miles off its coast, provided that the area does not overlap with the seabed of other States.  In addition, States can establish the right to further seabed if they can prove with geological evidence that their continental shelves extend more than 200 miles beyond their coasts.  Underwater mountains as in the Arctic can be considered as part of their continental shelf if they are linked or were linked to the above-sea continental shelf.

The only alternative to the application of the Law of the Sea Convention would be a new treaty among only those States concerned with the Artic Ocean sea bed.  The precedent for such a treaty is the Treaty on the Antarctic in which 12 countries ratified a treaty to create a legal framework to govern the southernmost continent.  Some have presented this Antarctic model as a way to deal with US claims of the costal shelf of Alaska, as the USA can not use the Law of the Sea Convention bodies.