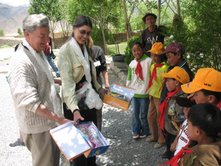 The Tibetan Orphanage Initiative is the result of the recent Pilgrimage to Tibet sponsored by the TSA. While on that Pilgrimage we had the opportunity to visit two orphanages. Both of these operations are known by and supported by our Pilgrimage guide, Glenn Mullin, and Organizer, Pawan Tuladhar.

For several years they have helped support orphans in the area personally and from donations given by individuals from various tour groups they have led through Tibet. Because it is so important to have someone local manage and be accountable for funds being donated, we asked both Glenn and Pawan if they would agree to be the Initiative's point of contact; they both agreed.

Everyone on the Pilgrimage recognized the needs of these Tibetan children and while on the Pilgrimage made a substantial contribution which was used to provide shoes, socks, and fruit for all the children at the Chu Shull facility. During the trip our discussion of the possibility of a program of ongoing support received wholehearted endorsement by the pilgrims. Now the Theosophical Order of Service in USA has agreed to include the Tibetan Orphanage Initiative as one of the projects it supports under the umbrella of the Children’s Education Fund.

The two orphanages included in this proposal are:

This orphanage has 87 children who were abandoned including infants. One child was an infant who had been left on the street and a dog had mauled part of her leg. They got the child medical care and now she can walk. Dekyi’s facilities are minimal to say the least. A couple years ago the sponsor who had committed to constructing a building dropped the project before it was finished, so they are in desperate need of completing that building.

When we visited Dekyi the children were happy and looked well cared for. They had few toys and no play equipment that we could see. They live in dorm rooms of 6 to 8 beds, double decker.

The completion of uncompleted building is the most pressing need at Dekyi. It is estimated to cost $10,000 US.

This facility is outside the city of Lhasa on the way to the airport. Being in a rural area it has more space and better facilities. The children have classes on campus and the older children go to the local school. An organization Glenn and Pawan worked with supported the construction of a building to house the kitchen and eating area. Their bathing and toilet facilities are quite substandard, so the most important thing we could do for Chu Shuul would be the construction of a replacement facility at an estimated cost of $5,000 US. The facility was clean and the children were happy and well kept.

Project Options
There are three options for immediate and long term support.

C.   Sponsorship Program
This would be a long term child Support Program, so the children can  complete schooling. Generally half the cost of schooling is carried by the government, because the kids are orphan. But they are expected to raise the other half by themselves. One year for a child at the present state of the economy in China costs as follows: $150 for school fees; $150 for food; $100 for clothes; and $100 for books, school supplies and medicines like vitamins or a total of $500 per year. Because one orphanage is three times the size of the other, Glenn suggests that three sponsorships go to the Chu Shuul and then one to Dekyi on a rotation basis consistent with the funds available.

You may decide how you want to contribute.

Thank you for caring!