The big gray house. Gwendolyn, a member of the Washington DC Theosophical Society (TS) group, often wondered what went on in the big gray house up the street from where she lived. It was “Joseph’s House,” a hospice caring for the dying homeless.  After taking a tour, Gwendolyn told her fellow TS members they just had to see this for themselves. So Rozi Ulics, the group's Theosophical Order of Service (TOS) Co-Liaison, and the others went, wondering what they were walking into. For Rozi, as for most of us, “Death is an intimidating thing and when you throw in homelessness, it almost seems hopelessly overwhelming.” 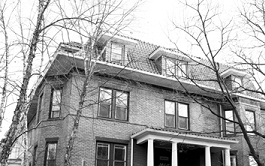 Hospice on steroids. Hospice provides support and care for persons in the last phases of an incurable disease so they may live as fully and comfortably as possible. Hospice sees the dying process as part of the normal process of living and focuses on enhancing the quality of remaining life. Joseph’s House is an intentional community affiliated with a Christian church, but they also include Zen Buddhist practices in their daily routine to ensure that the residents get the most loving care possible, and also to prevent burnout and depletion among the staff and volunteers. “You really have to see it to believe it,” Rozi says. The staff practices compassionate care “so that the act of service itself becomes a source of healing, both for the served and the server.” Founder David Hilfiker explains, “Our hope is not to present God to anybody, but to SEE God in everybody." 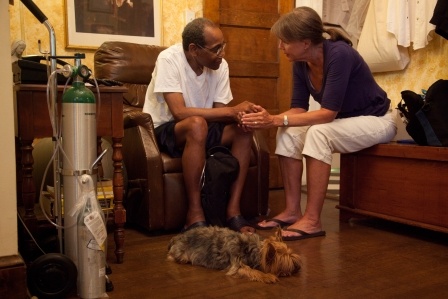 Rozi saw how precious each resident is to the staff, who make sure the residents’ last days “are filled with all the compassion and dignity and love they didn’t get on the streets. Then they memorialize them after they die so they are not forgotten.” Joseph’s House calls it “healing into death.” Rozi calls it “hospice on steroids” and noticed that the healing doesn’t stop with the residents. Staff members love to tell stories about the profound impact each resident has had on their lives.

Love grows. Director Patty Wudel wrote, “I don’t know what I thought love in a hospice for the homeless could look and sound and feel like long ago before I first encountered Joseph’s House, but I can tell you that at Joseph’s House it is gloriously different from anything I could have imagined!” Patty tells the story (one among so many) of James, a resident with end-stage lung cancer, and Brittney, a young volunteer. Patty says that James “knows he is dying, but he is not waiting to die. Every day James [an artist] opens his heart and mind and he attunes to the world around him. Others attune to James.

Over the six months or so that he has lived at Joseph’s House, James has fallen in love. He fell in love with Brittney, a beautiful young lover of life if ever there was one – and she fell in love, gradually, with James. In her mind he went from being a suffering, grumpy old man whose life experiences had nothing in common with her own to being James, who she delights in. They have become each other’s favorite. When James and Brittney are together the rest of us feel happy. We feel the love. For Brittney, this is surely God’s love; so steady and generous and real.”

Magic is not a metaphor. Don’t miss Patty Wudel’s short video “The Blue Dress” where she tells about the magic that happened around midnight one Christmas Eve as she sat up late with Randi, a former singer with end-stage AIDS. Enjoying the stillness, twinkling lights, and Nat King Cole playing softly as everyone else slept, Randi made an unusual request--she asked to borrow Patty’s special blue dress. Patty will never forget what happened next, and when you hear Patty tell the story, you’ll know that “the magic of Christmas” is no mere metaphor.

New Friends. Watch this brief PBS video for a glimpse of the work being done at Joseph’s House. If you feel moved to help (just $25 provides breakfast for 12), you can donate here.

Joseph’s House has found new friends in the Washington DC TOS group. TOS workers have helped with fund raising, monetary contributions, and have donated specialized professional expertise. Rozi says, “There are just so many lessons they have for us about living intentionally and loving whole-heartedly. It applies to all of us.”